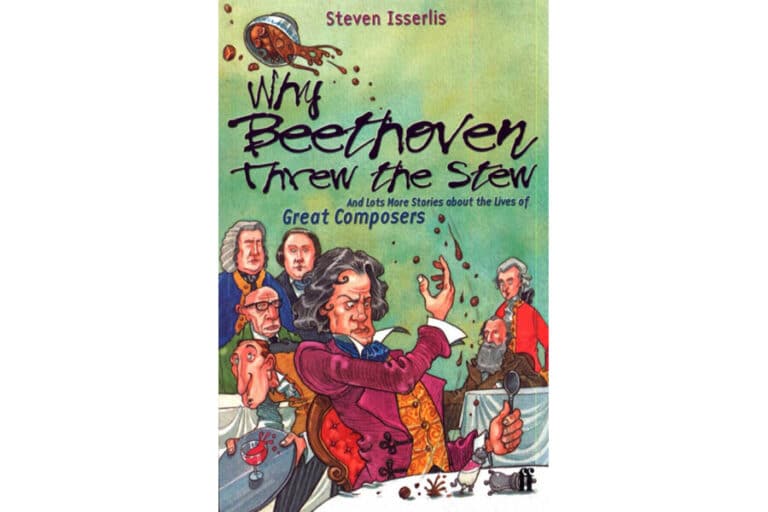 Why Beethoven Threw the Stew

In Why Beethoven Threw the Stew, renowned cellist Steven Isserlis sets out to pass on to children a wonderful gift given to him by his own cello teacher – the chance to people his own world with the great composers by getting to know them as friends. Witty and informative at the same time, Isserlis introduces us to six of his favorite composers: the sublime genius Bach, the quicksilver Mozart, Beethoven with his gruff humor, the shy Schumann, the prickly Brahms and that extraordinary split personality, Stravinsky. Isserlis brings the composers alive in an irresistible manner that can’t fail to catch the attention of any child whose ear has been caught by any of the music described, or anyone entering the world of classical music for the first time. The lively black and white line illustrations provide a perfect accompaniment to the text, and make this book attractive and accessible for children to enjoy on their own or share with an adult.

This book is a unique introduction for children to the world of classical composers and their music.

Steven Isserlis was born into music at a fairly early age. His whole family was musical – his father plays the violin, his mother played the piano, and his two sisters play the violin and viola – so he took up the cello because he didn’t want to get left out. He soon decided that playing the cello was what he wanted to do for the rest of his life (partly because it meant that he wouldn’t have to get up too early in the morning to get to work). These days, he travels all over the world, playing concerts to whoever wants to listen (and to a few who don’t too) and making recordings. He studied in England, Scotland and America; his main teacher was a wonderfully eccentric lady called Jane Cowan, who convinced him that he had to become friends with the composers whose music he played. In 1998, he was awarded a CBE, for ‘services to music’; and in 2000, the city of Zwickau (birthplace of the composer Robert Schumann, to whom a chapter in Why Beethoven Threw the Stew is devoted) bestowed the Schumann Prize 2000 upon his curly head. He lives in London, with his wife and son, lots of cellos and a piano. Find out more at Steven Isserlis’s excellent website.

Video / Audio 1:
Why Beethoven Threw the Stew
San Francisco San Francisco, California
You must be logged in to submit the form.

Why Beethoven Threw the Stew

Send this to a friend
Hi, I thought you might like to know about this listing from Mozartslist:
https://mozartslist.com/classified/why-beethoven-threw-the-stew/