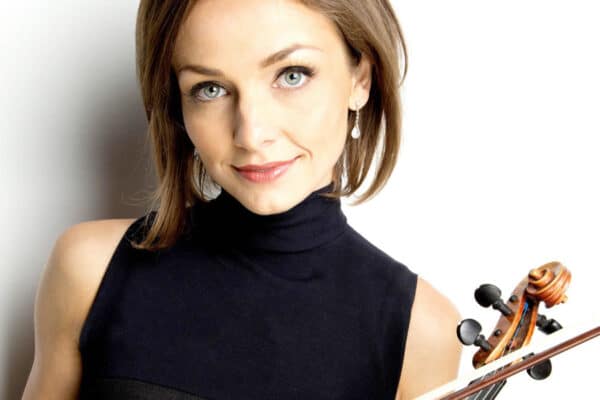 Dissolve, O my Heart has its roots in a late-night conversation over Chinese food and cupcakes with violinist Jennifer Koh. She told me about her Bach & Beyond project, a program that combines Bach’s Sonatas and Partitas with newly commissioned works, and asked if I would write a piece that referenced Bach’s Partita in D Minor. This request was, to put it mildly, utterly terrifying; the last movement of the Partita, the Chaconne, is undoubtably the most famous piece of solo violin literature in the world. It overwhelmed Brahms, has been subject to hundreds of transcriptions and arrangements over the past two centuries, and is dizzying in its contrapuntal complexity. But something about Jennifer’s enthusiasm was infectious, and I agreed to the project before I realized what I was getting myself into. Jennifer seemed to approach Bach through the lens of contemporary music, and I realized that this was what this new piece should do as well.

Dissolve, O my Heart begins with the first chord of Bach’s Chaconne, a now-iconic d minor chord, and spins out from there into an off-kilter series of chords that doubles back on itself, collapses and ultimately dissolves in a torrent of fast passages. The only direct quote from the Partita is that first chord, which anchors the entire piece even as it threatens to spiral out of control. The title comes from an aria in the St. John’s Passion, but has many potential interpretations.Dissolve, O my Heart was commissioned by the Los Angeles Philharmonic and was premiered in 2011 as part of their Green Umbrella Series in Disney Hall.

Tatiana Berman is a Russian-American violinist, artist, and producer who finds fresh ways of connecting classical music and fine arts with a broader audience. Tatiana founded Constella Arts, c0-created Not So Classical, and most recently, starred in the highly successful Forte documentary. Her paintings are sought after by collectors from around the world.

Despite the changes in recent times, Tatiana stayed true to her mission. She continues to appear in various interactive and educational performances, Q & A sessions, movie screenings, and workshops. Her innovative approach brought her to venues such as The Kennedy Center, Elbphilharmonie Hamburg, Santa Fe Symphony, and Dr. Rodney R. Lafon Performing Arts Center. Tatiana also brings music education and performances into the classrooms virtually, in collaboration with (Myculturenet.com). Her new album Not So Classical is available on all major platforms, and the accompanying visual experience is currently available on Culturenet.com. The original performance concept Not So Classical has been praised by Forbes, NPR, and Playbill for its innovative approach in presenting a classical music concert experience. In the works – a premiere of the first-ever Violin Concerto composed by artificial intelligence.

Tatiana is the founder and artistic director of Constella Arts (Festival), which to date has presented over 70 world premieres, and brings music to schools where arts funding has been cut. In partnership with Culture Monster, Constella Arts produces innovative content, connecting classical music with a broader audience. Tatiana’s video Vitali Variations is featured in Huffington Post and broadcast on music channels worldwide.

Tatiana studied violin at the St. Petersburg Specialized Music School and then at the Yehudi Menuhin School and the Royal College of Music in London, earning full scholarships, and international awards along the way. Throughout her international career as a concert violinist, Tatiana has collaborated with renowned musicians, including Joshua Bell, Ksenia Bashmet, Jeremy Denk, Bryce Dessner, Ivry Gitlis, Steven Isserlis, Elisabeth Leonskaja, Anthony McGill, Nico Muhly, Simon Trpceski, and Ted Nash. She has worked with conductors Paavo Jarvi, Sarah Ioannides, Tito Muños, Jose Luis Gomez, François López-Ferrer, and the late Yehudi Menuhin, appearing with both European and U.S. orchestras. London’s The Strad described Tatiana as “a violinist with a mature, compelling musical personality.” Tatiana is an ardent performer of new music, commissioning and collaborating on artistic projects with dancers and digital artists. Notable performances include world premieres of Violin Concertos by Charles Coleman and Michael Csányi-Wills. In 2012, Tatiana was named Arts Ambassador for the City of Cincinnati, Ohio, and became a Ted Talk speaker. Tatiana is a producer on the documentary Maestro (maestromovie.com and Nordic Pulse (nordicpulsefilm.com) To see some of Tatiana’s visual art, go to Art Gallery.

Send this to a friend
Hi, I thought you might like to know about this listing from Mozartslist:
https://mozartslist.com/mozart-tv/tatiana-berman-violin/