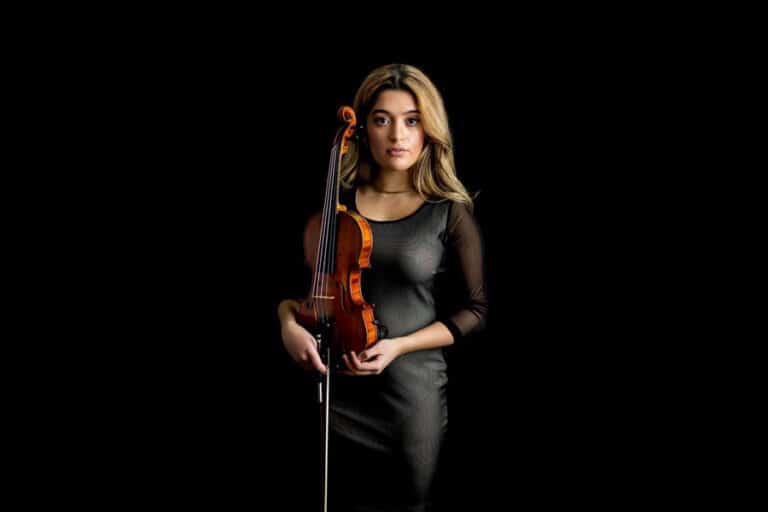 Nikki Naghavi: My Debut at the Royal Palace

My name is Nikki, I play the violin, and I’m currently in my third year of an undergraduate degree at the New England Conservatory in Boston. I’m originally from Dallas, Texas, and I come from a Persian family.

This is the story of me busking for the first time in public. The setting is that it’s 2011 in Madrid, Spain, right in front of El Palacio Royale (the Royal Palace). It’s around 6:00 pm in the evening. It’s just beginning to get dark. I’m walking around town with my parents after we finished dinner—I’m about ten years old.

I have my violin with me and I decide I want to pull it out and play. I had seen some street performers earlier that day, and also throughout the week we were there. I said to myself ‘Okay, it’s my turn to try this out.’ And so I pull out my violin and began to play. I played these really basic Suzuki pieces, small things—but people would see a young girl, standing on top of a bench, playing violin—which can still sound impressive to the average non-musician for someone that young to be playing.

So I’m playing and maybe 15 – 20 minutes go by and then I start playing the second violin part to the Bach double, Bach’s concerto for two violins in D Minor. And you know, it’s funny because this piece is supposed to include two solo violinists as well as an orchestra. I was standing there playing the piece with all these rests in the music— those empty spaces that don’t really make sense within the whole structure of the piece for me to be playing alone. But I was playing the part as written. And so, a few minutes into that I notice a man, probably in his late 60s, standing on the side, and when I finish he tosses a coin into my case. I see that he has a violin on his back, and I say ‘Oh, do you also play the violin?,’ and he says ‘Yes!,’ and I ask him ‘Would you like to play the Bach Double with me?,’ and he says ‘Why not?’ And so he pulled out his violin and we start playing together, and obviously this time around it made a lot more sense for the audience, and for me as a musician as well.

It was such a fun experience for me, a kid on my first busk!

So after I finished playing, I packed up my violin and my parents and I started talking to him. His name was Daniel and we started to get to know him. It turned out he was a street musician and also taught violin in Madrid. We ended up sharing a few meals together during the rest of our time in Madrid, and he very generously gave me violin lessons for the rest of our visit. He also gave me copies of many recordings of the great violin masters and overall was such a kind and generous human being.

Ten years later, in 2021, I went back to Madrid and I saw Daniel again. It’s been great to stay in contact with this really kind person, to see how he’s been doing amidst these times that have been hard for everyone around the world.

In life, when you create these kinds of connections and continue them and nurture them—this is something truly special. Then to be able to reconnect, that’s something magical, and for me that’s a really powerful aspect of music. Music connects us in profound ways. The musician’s life is a gift.

Nikki Naghavi: My Debut at the Royal Palace

Send this to a friend
Hi, I thought you might like to know about this listing from Mozartslist:
https://mozartslist.com/portraits/my-debut-at-the-royal-palace/